XKCD is the undisputed king of webcomics, both in content and popularity. We know this. However, there are approximately six kajillion other webcomics out there, and a few more that I've become quite fond of. So, in descending order, here are the top six that I've found. You'll have to excuse the slightly hipster-ish nature of this post, bit I swear to God, nobody has ever heard of some of these, including my favorite. (I get to differentiate myself from hipsters by not holding that up as a virtue!)


Consciously inspired in part and influenced in large by Calvin & Hobbes, Sandra & Woo chronicles the adventures of a grade-school girl and her talking raccoon, as well as a coterie of her friends. The comic is a German/Indonesian collaboration between writer and artist, whose drawings are reminiscent of Japanese manga, but very technically detailed. The comic has periodic story arcs that'll last a dozen or a couple of dozen strips, which can be as lighthearted as exploring an abandoned building Final Fantasy-style, or as serious as a panegyric on human rights violations in Burma. I enjoy watching Woo (the raccoon) and his animal friends more than I do the humans in the comic, but the humans are still interesting and generally well-drawn. Woo isn't a sanitized Disney animal, either; as you can see in the first comic up above, he's frequently shown killing and eating prey. That isn't glossed over for younger readers, which I've always found appealing.
Now, it's not the greatest comic; the strip's FAQ tells us the writers have stopped focusing so much on Woo and Sandra since around fall '09, in favor of the human families of Sandra's friends, which I think is generally less interesting. That doesn't mean, however, that it isn't a very technically accomplished and very good comic.


Webcomic #5: Scandinavia and the World!

I don't know a thing about Scandinavia, aside from odd tidbits that I picked up last semester from living with a Norwegian, and the fact that I cannot for the life of me spell 'Norwegian' without help from Google.
This is still funny, though. A Danish artist turned comic-strip writer created this comic, in which the characters are all personifications of countries, or rather the stereotypes of those countries. There's a lot of in-joking about Scandanavian stereotypes (the main characters are Sweden, Norway, Denmark and Finland), but Humon (the artist) always explains the jokes at the bottom of the page, which are sometimes funnier than the comic in question. The strip itself is funny, obscene at times and often devastatingly accurate in its characterizations, which aren't limited to Scandanavia. The USA frequently makes appearances as a well-meaning but immature dude (my favorite strip has him charging into Iraq while yelling "LEEEEEROOOOOYYY JENKINS!!!!!!"), and by this point most of Europe has also had cameos. The stereotypes Scandanavians apparently have about the U.S. tend to vary between puzzlingly wrong and devastatingly accurate.
By now, the strip has its own mythology, with lots of relationships between the various countries and even some children. The hilarious thing is that all of the relationships do have some bearing in either history or stereotypes. It's a little hard to keep track of if you don't know all of the various Scandanavian islands and principalities offhand, but that makes it no less fun to read.


Webcomic #4: Edmund Finney's Quest to Find the Meaning of Life! 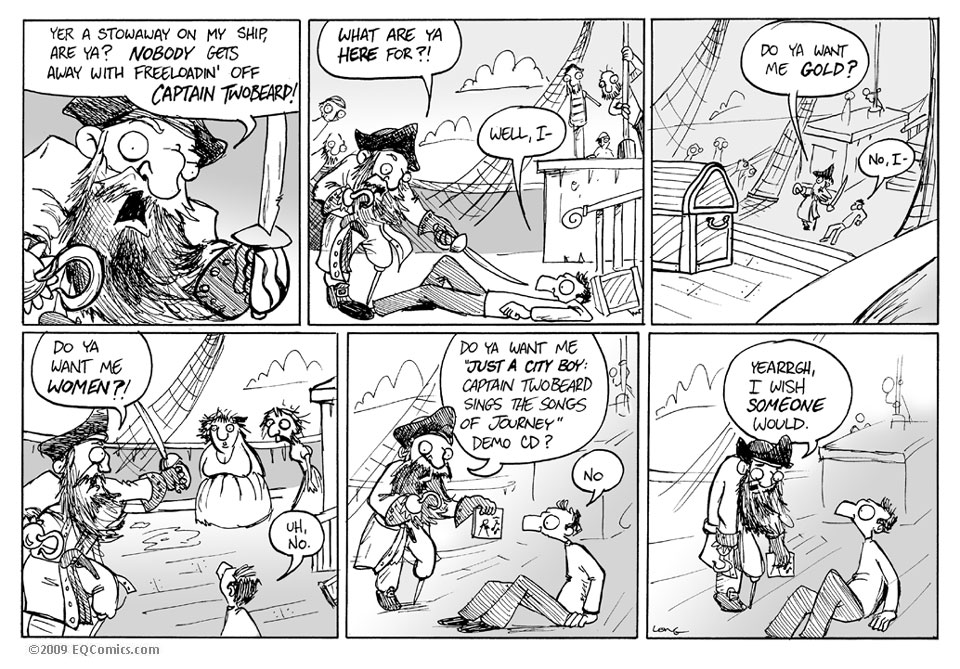 The most wonderfully unconventional of the comics, this one chronicles the travels of Edmund Finney through a fantasy world populated by aliens, pirates, time-traveling diners, giant walking eggs, talking turkeys, miniature witches, trolls that live under the streets and every other weird thing you could imagine. There's no overall storyline to the comic, which is a little saddening because it could make an excellent serial, but the various encounters Edmund has with various strangers are really funny by themselves. The comic is very well-drawn, too; artist Dan Long has a very distinctive way of drawing faces that I don't think I've seen anywhere else. He's created a world where everyone plays by different sets of really weird rules, and Edmund is the only sane person wandering through it all, trying to find the meaning of all of this. The comic is frequently critical of bits of everyday life, particularly advertising and/or the media, and can sound preachy at times. However, that's more than offset by the wonderful silliness in nearly every comic. I'd recommend this one to webcomic readers of any taste. 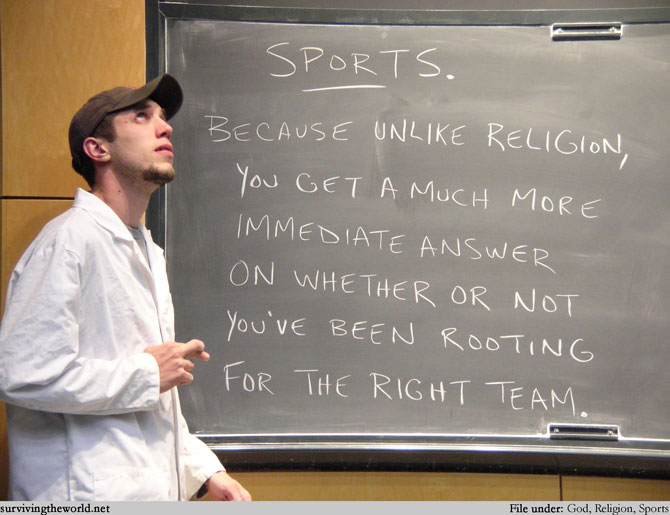 STW is unique on this list in a couple different ways. First of all, it's the only photocomic I know that's worth reading, and second, it's the only webcomic anywhere (probably) that's actually taught as an accredited class at a real live university. (Sorta.)
From creator Dante Shepard, STW is exactly what it sounds like: Little bits of wisdom about and commentary on the art of getting through life. 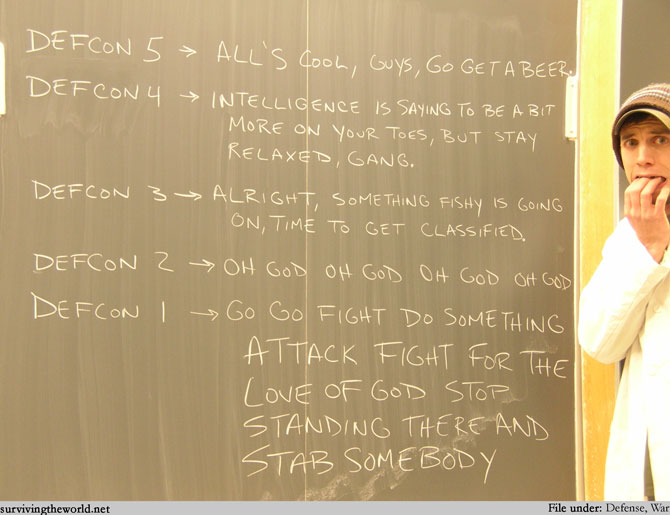 Some of it is helpful, some of it should not be applied practically by any sane individual, but the comics are generally pretty good. It's always fun to watch Dante's face in the sidebar, too, which can be anything from scared silly (above) to massively goddamn creepy (see link in title). Published every day, and usually early, it's a great way to get your humor fix in the mornings.

(By the way, folks, here's where the hipsterism starts; both these last two are entirely obscure.)

Sadly no longer running, Daisy Owl is still my second favorite webcomic because of its uniqueness. The strip didn't go for a punchline or an easy joke, preferring (much of the time) to try more offbeat humor or just plain ridiculousness. Example: The main characters are a bear, an owl and the owl's two human children. The children were originally space babies developed by the government, who were shot into orbit accidentally, crashed in Owl's backyard and were adopted by him.

The art is sporadic; most of the comics are like the one above, with no backgrounds and lots of blank space, but every so often will come along this wonderfully detailed drawing extravaganza. The humor isn't for everyone, but I found it both really funny and really endearing. Sadly, the strip started feeling forced towards the end, and it shows in the last big storyline; the artist ended up stopping Daisy Owl because he was feeling the pressure of coming up with a new gag every few days. The early and middle of Daisy Owl, though, are excellent.

Let me tell you a little story about how I reacted when I found Freefall. The comic has been updating every three days since 199-freaking-9, giving it a massive backlog of comics (over 2,000 right now, for those scoring at home). The day I discovered it, I read all 2,000 comics in less than 24 hours.

Freefall is a science-fiction webcomic, combining the best elements of hard sci-fi (no "magic" technology, just extrapolating from what we already know) with excellent, detailed characters, original ideas and complex, intricate plots. The comic takes place on a world that's in the process of being terraformed, a sort of frontier existence. Many of the main characters are robots; others include a squid-like alien, a wolf/human hybrid A.I., and the occasional human. The development of the characters themselves has been fascinating to watch, but I've never seen a comic that gets inside the heads of non-human entities as well as this one does. They have realistic goals and desires, and worldviews that aren't just a human perspective grafted onto a robot body. This comic reads like the creator really did get inside the minds of some robots and give them their own unique perspectives, which is really incredibly rare.

Now, the comic isn't perfect. Each strip covers only a fraction of a day or a conversation, and the strip attempts to mimic the lives of these characters as closely as possible. This means that in its twelfth year and its 2,000th strip, Freefall has advanced less than six months in in-comic time. Major plot threads will take a long, long time to resolve; the current plotline, which deals with stopping a robotic war, has lasted for a few months now and is still only in the exposition. Nevertheless, it's an extremely good webcomic that's hindered only by its formula, and contains dozens of distinctive and believable characters. Whether it's main characters Sam Starfall (squid), Helix (robot), Florence Ambrose (Bowman's Wolf) or recurring contributors like Qwerty, Dvorak, Sawtooth Rivergrinder, Edge, Blunt (robots) or even the occasional human (The Mayor, Mr. Konada, Winston Thurmad), every single one is a pleasure to read. I highly recommend plowing through the archives; you might be done sooner than you think possible.